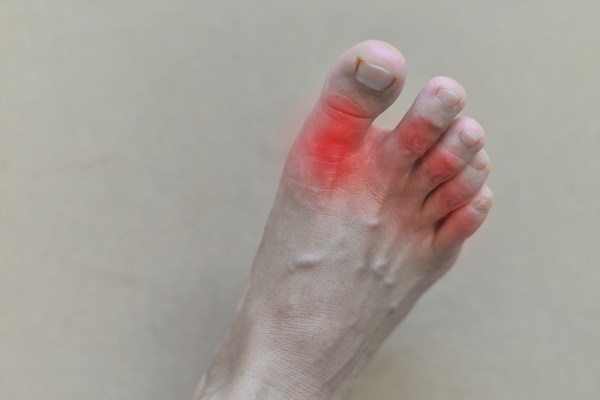 Yes, it can – especially for men.

Gout is a particularly painful type of arthritis, caused by sharp, crystallized deposits of uric acid in the joints. Uric acid is produced when the body processes purines – substances found in some foods and beverages like liver, seafood, peas, and beer. Uric acid is usually absorbed in the blood, processed by the kidneys, and eliminated with urine. But sometimes, the kidneys don’t process uric acid properly, causing it to build up. Uric acid can also accumulate when a person eats too many foods that contain purines.

Eventually, the buildup forms sharp crystals, leading to gout. Gout often starts in the feet, especially in the big toe. But it can also form in the knees, wrists, fingers, and elbows. In addition to pain, patients with gout may experience swelling, stiffness, and redness in the affected area.

Gout is far more common in men than in younger women. Estrogen, a female sex hormone, helps the kidneys process uric acid. However, once women reach menopause, their risk for gout increases, as their estrogen levels drop substantially.

In women, gout tends to occur more in the fingers and ankles. It is also more common in women with high blood pressure and poor kidney function.

Studies have shown that men with gout are at higher risk for developing erectile dysfunction (ED). They are also more likely to have severe cases of ED.

In 2017, the journal Arthritis Research & Therapy published a large study on gout and ED in men who lived in England. They identified 9,653 men between the ages of 18 and 64 who were diagnosed with gout between 1998 and 2004 and followed them until 2015. For comparison, they also identified 38,218 men without gout who were around the same age.

The men with gout were also more likely to drink more alcohol, be overweight, or have medical conditions like diabetes, high blood pressure, heart disease, chronic kidney disease, and depression.

In addition, the researchers discovered that ED risk might be increased within the year before a gout diagnosis, possibly because of higher levels of uric acid in the blood.

Pain from gout can make sex uncomfortable for both men and women. Some couples try new sexual positions or have sex when medications for gout are most effective. It’s important for patients to tell their partners if a particular activity is painful and feel open to discussing other options for intimacy.

Patients with gout may take non-steroidal anti-inflammatory drugs (NSAIDs) to manage pain and inflammation. Other medications may be prescribed to stop production of uric acid or improve the body’s ability to process it. Eating a healthy diet that is low in purines might help relieve the severity and frequency of gout attacks.

Those who think they may have gout, particularly men with ED, are encouraged to see their doctor.