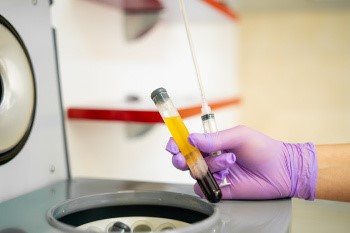 Platelet-rich plasma (PRP) therapy refers to injections used to reduce inflammation and promote tissue healing. Athletes sometimes have PRP to speed up the healing of sports injuries. PRP has also been used for hair loss, cosmetic surgery, and osteoarthritis.

Some practitioners claim that PRP injections into the penis or the vagina can improve sexual function and satisfaction. This use is considered experimental and has not been widely studied.

For men, the injection is called the “Priapus shot” or “P shot” and is thought to improve erections and increase penis size.

For women, PRP therapy is called the “Orgasm shot” or “O Shot.” Practitioners claim that the shot leads to heightened libido, better vaginal lubrication, and more intense orgasms. Again, these claims are not evidence based.

The process involves separating platelets from a patient’s own blood and injecting them directly into the genitals.

When a person has a cut, scrape, or other type of bleeding wound, platelets – small blood cells – work to stop the bleeding by clotting the blood. Proteins in platelets also contribute to wound healing.

Some scientists believe that injecting platelets from a patient’s own blood into a wounded area could help it heal more quickly.

In 2017, researchers reported on a small study of nine men with erectile dysfunction (ED). Each participant received one PRP injection in addition to a standard ED treatment (medication or vacuum therapy). The men’s scores on an ED assessment did get better, and none of the men had serious side effects.

The authors wrote that “PRP may represent a safe and viable option as a supplementary therapy for penile rehabilitation.” But they added that more research is needed.

This small study had no control group. Therefore, the only true result was that PRP therapy did not cause significant harm because all patients underwent typical erection therapies in addition to the PRP.

Currently, regulatory agencies have not approved PRP therapy for the treatment of sexual dysfunction.

Nevertheless, some practitioners market PRP therapy with promises of better sex. These claims should be considered with caution. There have been no large randomized controlled trials to show efficacy.

In 2018, the Sexual Medicine Society of North America (SMSNA – an ISSM-affiliated society) released a position statement on ED restorative therapies, including PRP therapy. The organization encourages further research so that clinicians can fully understand the pros and cons of therapy, as well as its long term safety.

People considering PRP therapy for sexual dysfunction are encouraged to see their healthcare provider for advice on standard treatments that are backed with solid scientific evidence. In some cases, patients see sexual improvements by making lifestyle changes, addressing an existing health condition (such as diabetes or heart disease), changing medications, counseling, or communicating more openly with a partner.