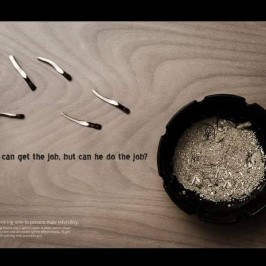 Most patients know not to smoke, don’t they? Maybe so, but that doesn’t mean that they (and their partners) don’t smoke, or that they tell the truth to their doc, or that they aren’t exposed to significant amounts of secondhand smoke.

Does everyone remember the 2004 Surgeon General’s Report, The Health Consequences of Smoking? Chapter 5, Reproductive Effects, states, “…smokers may have decreased semen volume and sperm number and increased abnormal forms…Numerous studies have shown that smoking results in reduced fertility and fecundity for couples with one or both partners who smoke….An increasing number of studies have used couples seeking treatment for infertility. These studies have consistently shown that treatment success is affected by smoking. Several studies documented that the success of in vitro fertilization is significantly reduced among smokers compared with nonsmokers.”

The good news is the ready availability of evidence-based Smoking Cessation Guideline materials for health care professionals and the public, including beneficial brief interventions designed for the busy doctor’s office. First developed in 1996, the Guideline is updated regularly.