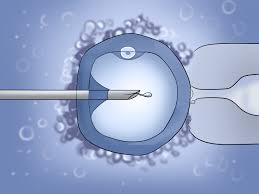 What is intracytoplasmic sperm injection (ICSI)?

Before a man’s sperm can fertilize a woman’s egg, the head of the sperm must attach to the outside of the egg. Once attached, the sperm pushes through the outer layer to the inside of the egg (cytoplasm), where fertilization takes place.

Sometimes the sperm cannot penetrate the outer layer, for a variety of reasons. The egg’s outer layer may be thick or hard to penetrate or the sperm may be unable to swim. In these cases, a procedure called intracytoplasmic sperm injection (ICSI) can be done along with in vitro fertilization (IVF) to help fertilize the egg. During ICSI, a single sperm is injected directly into the cytoplasm the egg.

How does ICSI work?

There are two ways that an egg may be fertilized by IVF: traditional and ICSI. In traditional IVF, 50,000 or more swimming sperm are placed next to the egg in a laboratory dish. Fertilization occurs when one of the sperm enters into the cytoplasm of the egg. In the ICSI process, a tiny needle, called a micropipette, is used to inject a single sperm into the center of the egg. With either traditional IVF or ICSI, once fertilization occurs, the fertilized egg (now called an embryo) grows in a laboratory for 1 to 5 days before it is transferred to the woman’s uterus (womb).

Why would I need ICSI?
ICSI helps to overcome fertility problems, such as:
• The male partner produces too few sperm to do artificial insemination (intrauterine insemination [IUI]) or IVF.
• The sperm may not move in a normal fashion.
• The sperm may have trouble attaching to the  egg.
• A blockage in the male reproductive tract may  keep sperm from getting out.
• Eggs have not fertilized by traditional IVF, regardless of the condition of the sperm.
• In vitro matured eggs are being used.
• Previously frozen eggs are being used.

ICSI fertilizes 50% to 80% of eggs. But the following problems may occur during or after the ICSI process:
• Some or all of the eggs may be damaged.
• The egg might not grow into an embryo even  after it is injected with sperm.
• The embryo may stop growing.

Once fertilization takes place, a couple’s chance of giving birth to a single baby, twins, or triplets is the same if they have IVF with or without ICSI.

Certain conditions have been associated with the use of ICSI, such as Beckwith-Wiedemann
syndrome, Angelman syndrome, hypospadias, or sex chromosome abnormalities. They are thought to occur  in far less than 1% of children conceived using this  technique.
Some of the problems that cause infertility may be genetic. For example, male children conceived with the use of ICSI may have the same infertility issues as their fathers.