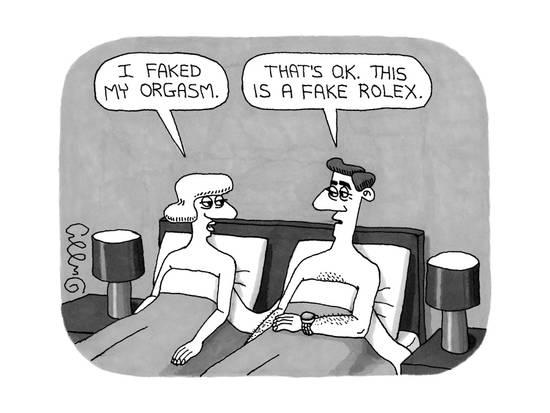 How common is it to “fake” an orgasm, and why do people do it?

Both men and women pretend to have orgasms, and the practice of “faking” is fairly common. Research suggests that women are more likely to fake orgasm than men are.

For example, a 2009 study published in the Journal of Sex Research reported that among a group of college students, 25% of the men and 50% of the women had pretended to reach orgasm. Among participants who had had vaginal intercourse, 28% of men and 67% of women said they faked orgasm.

Women often fake orgasm by making corresponding sounds, like moaning or gasping. They may breathe more quickly or move in ways that make their partner think they are climaxing.

Since men typically ejaculate when they reach orgasm, faking it may be more challenging. However, if a man wears a condom, he might be able to dispose of it before his partner realizes he hasn’t climaxed.

Men and women cite many reasons for faking orgasm. Sometimes, they just want the encounter to end, especially if they know they are not going to climax.

Often, people have their partner’s feelings in mind when they fake orgasm. They want their partner to think they enjoyed the experience. Or, they may want to avoid making their partner feel inadequate or anxious about performance the next time they have sex.

Some heterosexual couples feel that there is a proper sequence for orgasm, with the woman climaxing first. So a woman may fake her orgasm to follow this sequence, even if she feels she will actually reach orgasm with a little more time.

Experts have also found that some women fake orgasm because it makes them more aroused, leading to greater sexual satisfaction.

Many couples think of orgasm as a goal to be achieved by the end of sex and that if orgasm doesn’t occur, they have failed in some way. But orgasm is a complex process that may not happen all the time. Focusing instead on the intimacy shared rather than a big climax can make sex more fulfilling for both partners. And if one partner does not reach orgasm regularly, it may be an opportunity for couples to discuss what pleases them or experiment with new sexual activities.